Catch Mr. Worldwide get it down while you yell 'timber! at Wells Fargo Arena on Sunday, 21st of August 2022. 'Ain't a damn thing changed as Pitbull hits the road on the Can't Stop Us Now tour where he'll be spitting his signature hype bars, with special guest Iggy Azalea. Amassing a slew of global smash hits including "Give Me Everything", "International Love", and "I Know You Want Me (Calle Ocho)", Pitbull is set to follow up his RIAA Latin certified Platinum record "Libertad 548" with an upcoming new album named "Timeless". Doing what he does best, Pitbull is set to create even more timeless hits in this new era. Catch Pitbull perform his best timeless hits and party-poppers together with big surprises at the Can't Stop Us Now tour. Grab your tickets now! 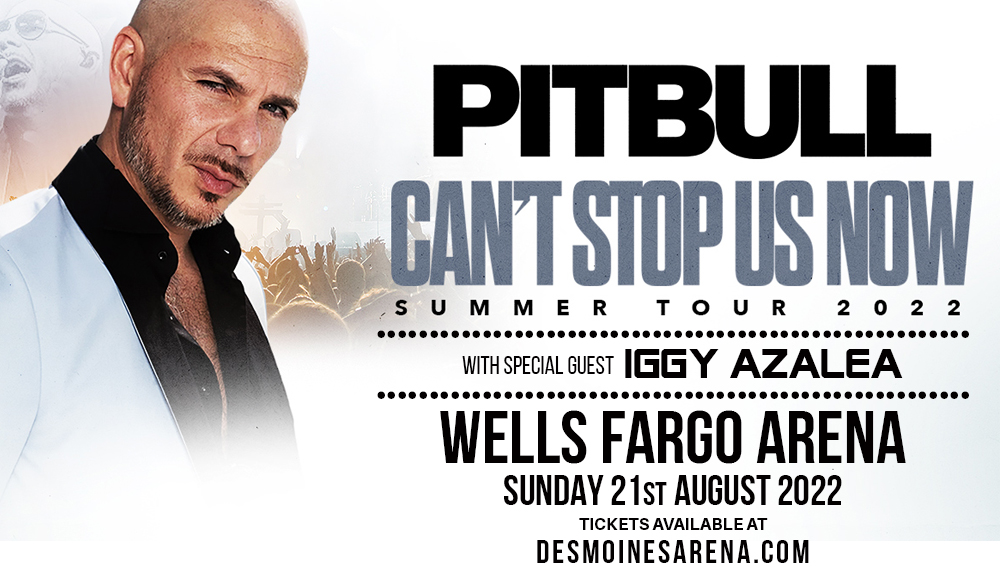 "Look up in the sky, it's a bird, it's a plane, Nah, it's just me, ain't a damn thing changed" – Pitbull raps in his #1 hit single with Kesha. Ain't a damn thing really changes as Pitbull is set to release his much-awaited 12th studio record entitled "Timeless", saying “It's about making Timeless music”.

Though finding his breakthrough in 2009 with "I Know You Want Me (Calle Ocho)", Pitbull's bite into the music scene traces back to 2001. The Cuban-American rapper owes his success to his hometown in Miami, saying:

"It's a melting pot. You know, it's a melting pot. You get a chance to grow up around so many different – you know, I've grown up in good neighborhoods, bad neighborhoods, worse neighborhoods. But growing up around so many cultures, it's always allowed me to think out of the box and try new sounds and try new things. You learn something new from every culture, just like I learn something new from every record." Pitbull told NPR.

Before bagging the title as Mr. Worldwide, Pitbull was also known as Mr. 305, standing for Miami's area code. Mr. 305 is also the name of his record label founded in 2009.

He released his debut album "M.I.A.M.I." in 2004 featuring its lead single "Culo" with Lil Jon, garnering some attention, entering the Billboard Hot 100.

His fourth album "Pitbull Starring in Rebelution" marked the start of his worldwide domination with "I Know You Want Me (Calle Ocho)" peaking at #2 on the Hot 100. From then on, Pitbull continued to drop timeless smash hits that never fail to hype up clubs across the globe.

With 'Mr. 305 checkin' in for the remix', Pitbull released a slew of hits and collaborations throughout the decade including "Back in Time", "Don't Stop the Party" featuring TJR, "Give Me Everything" featuring Ne-Yo, Afrojack and Nayer, "Feel This Moment" with Christina Aguilera, "No Lo Trates" with Natti Natasha and Daddy Yankee, and "Timber" featuring Kesha.

With chart-topping hits and party anthems up his sleeve, there ain't stopping Mr. Worldwide from dropping timeless hits in this new decade. With a new album in the works to be released real soon, big surprises await at the Can't Stop Us Now tour led by the one and only Pitbull. Book those tickets now!