Once again, Wells Fargo Arena brings you the very best in live entertainment as EDM duo The Chainsmokers come to wow the audience on Sunday 30th April 2017! A show that will undoubtedly leave you wanting more, don’t miss out onThe Chainsmokers, the highlight of your year! Get your tickets fast, before they go! 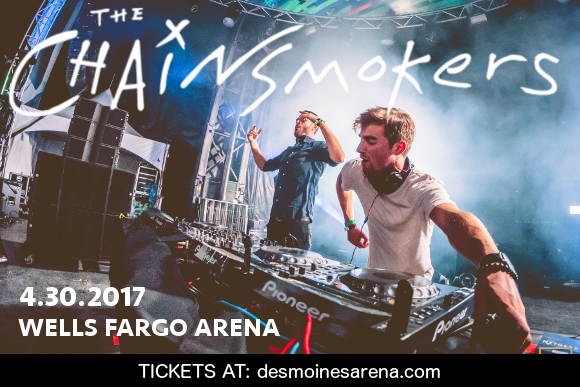 Made up of Alex Pall and Andrew Taggart, The Chainsmokers are an EDM/Pop duo, formed in New York City in 2012. Influenced by deadmau5 and Pharrell Williams, the two started developing their own brand of EDM, and would later go on to be part of the popularisation of the future bass genre, with their song “Roses,” being the first future bass song to achieve worldwide success.

They had their breakthrough hit, “#Selfie” two years after their formation, which hit the top 20 of multiple countries, and their first EP, “Roses,” released a year later saw similar success, charting in the Top 10 of the Billboard Hot 100. With “Don’t Let Me Down,” they saw their first top 5 single, and with “Closer,” their first number 1!!! “Don’t Let Me Down,” won the group a Grammy Award for Best Dance Recording. They’ve also won an American Music Award, and no less than an incredible FIVE iHeartRadio Music Awards!!
The duo are now on tour with their just-released debut studio album, “Memories…Do Not Open”!!! Be among the first to hear all the material from the album live – book your tickets to see The Chainsmokers LIVE!!